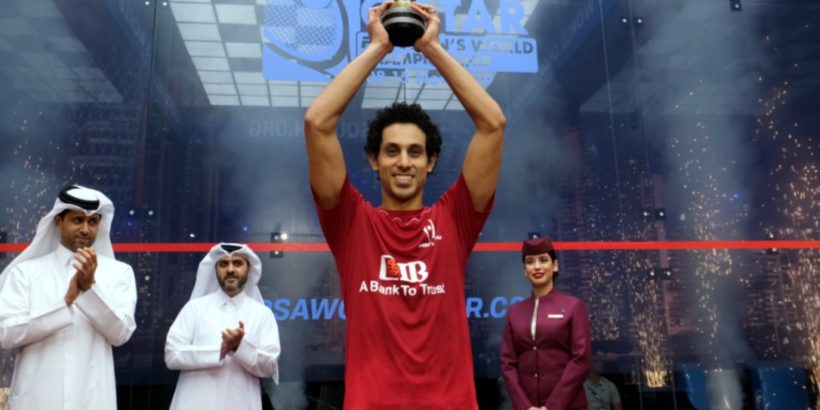 Tarek takes the title in Doha

Egypt’s Tarek Momen is the new World Squash Champion after a commanding performance in the final in Doha, storming to a three game victory over Kiwi Paul Coll in just 39 minutes.

Report and quotes below …

You have players that know they are gifted, they know how good they are. Who doubt themselves for a few minutes after a loss but then know in the heart they have what it takes to win it all.

Not Tarek. I’m lucky enough to have shared a few meals/breakfasts with him, after both losses and wins to know how dark his bad moments are, and how unsure of himself he is.

So today, no offence to Paul, who I absolutely adore and who I had down as the winner this week when we started the event but I am relieve, so relieved for Tarek, that he finally, FINALLY, got the reward he has been working so hard to get and that seemed to elude him…

This week, I didn’t disturb him once. Normally, I would share my breakfasts (late as he is always the last one to get into the breakfast room I kid you not) with him. But not this time. I knew he couldn’t be disturbed, talked to. I knew that he had to be left with his thoughts, fears, and with the people that know how to talk – or not – to him.

Tarek has a squash, like Raneem, that so often is about finding the absolute perfection. So high percentage. And if he loses confidence at the start of the match – especially against Superman that you just cannot kill off – he finds himself under enormous pressure and often errors creep in.

So the first game was pretty much crucial. He was in a “perfection day”. And Paul, bless him, I cannot believe I’m writing those words, was tired. I know, incredible, but he was. Not just physically, having played an hour more overall than he opponent, but also mentally…

Last year, Tarek had a rehearsal, he lost in the final, and this year, had the experience of what it feels like to play for the biggest match of your life. Paul, well, it was his first.. That I think counted as well. And after a few mammoth matches where he clinched the victory in the 5th, well, Paul proved tonight he is not a machine, like people are quick to state.

And in the second game, well, the body got tired, and called it a day. “I have enough mate, stop pushing me around, that’s just too much”. Tarek was playing his perfect game, pushing Paul from front to back to front to back to side to side… And very very few errors from the Egyptian, 5 in the whole match. I’ve seen him make that number of mistakes in the first half of a game!

At the end of the second, Derek Ryan, PSA physio came to tape the Kiwi leg but it didn’t help much unfortunately, and in the third, Paul just couldn’t push on that leg. And playing Tarek one leg? Not good.

The crowd played his part, if there was a good support for Paul, loud and present, the Egyptian contingent was respectful but awfully supportive, chanting Tarek’s name, and vocally carried their man throughout the match.

At 10/4 in the third, match ball, the crowd went wild. Tarek took his time, breathing and making sure he didn’t rush it. And he got it first time… Emotion pouring out, respectful embrace with Paul, a thank you kiss on the ground, a quick walk to Raneem, Farah, Haitham and Samir…

Tarek, who never won a platinum event, at 31, is now World Champion. Let that sink in for a minute… If I tell you how many times I imagined making this speech my whole life, it’s countless, and now, I just don’t know what to say, it’s so hard to digest. It has been a childhood dream of mine to become the World Champion and at some point, I am 31 now, and I was wondering whether I would have the opportunity to do it, so to be able to do it at this age and to still feel that I can give for a few more years is just unbelievable. I have worked so hard for this and I am so glad it finally paid off.

This was the toughest week of my life. I tried to hard to forget about the pressure, but it was just there all the time. And I’m just so relieved that today, now, for the first time, in over a week, I can breathe. I’ve been struggling so hard, and that’s why I brought Raneem and Farah with me, because I needed them.

I’ve never experienced the feeling of winning a match, then 5m after the end, being worried! Usually, when I win a match, I relax, and I chill, enjoy the day, and then the next morning, we start thinking again about the next match. But instead, I was tense all the time.

I knew the right I should be thinking about, I kept reminding myself, I kept talking to myself the whole week, just about to forget about that feeling inside of me, being worried.

The absence of Ali, then Gawad, Mohamed, that was a rollercoaster. I came into this tournament not in my best shape. I was in a very good shape at the beginning of the season, and then, I was hit with a couple of injuries that really affected me, and it was so hard to train.

So I would go into a tournament without the proper training. Then in the Egyptian Open, I has an incident in the first round. When I’m in this condition I hope for an first match I can ease into for the rest of event, even if I’m not playing my best. But in Cairo, I had a tough opponent, and I couldn’t prepare. It just frustrated me because I thought, OK, I’m going into the World Champs with the worse preparation ever, I’m in so much pain because of that planta fasciitis, nothing in working in my favour but I had the belief in me that I could win the world championship this season, because I worked so hard for four months, and I saw myself develop. I knew that at the start of the season, I was good enough. So it was a mixed feeling this week, coming into the tournament… My draw changed two days before the tournament, according to seedings I should have played Paul in the quarters, not in the final. Then I was moved to a completely new section, with a very tough start, with Kandra followed by Mazen Hesham, the last player I wanted to play!

At first, it was only Ali missing, then Gawad lost, and then Mohamed lost, and all of the sudden, I feel on paper it looks like an opportunity, but it just put a lot more pressure on me because I wanted to win so badly, and that if I didn’t win, I would regret it for the rest of my life, even if the calibre still remaining in the draw was so high. But I knew I would have gone home with so much regrets and just that put me through hell.

But I’m so happy that despite all that, I had the right people around me that helped me to fix all the issues.

I just worked so hard for this. For years, I’ve been trying and trying, I came up this close but then it didn’t happen for me. I haven’t won a platinium event and the first major I ever win, gets to be the World Championship, it’s unbelievable.

I knew I had the crowd on my side and I wanted to take the momentum and feel of the crowd and keep pushing. I cannot be more thankful.

I knew it was going to be physical and I wanted to push myself as hard as I could at the beginning so that maybe I could try to impose my game and maybe expose his movement. I had no idea how it was going to pan out but I just wanted to keep fighting until the end and eventually I managed to get the win, which was unbelievable.

I want to congratulate Paul on such an event and amazing achievement. He’s done so well making it this far. He had the better of our last finals appearances, I’m just glad I managed to get this one. It was such a strong match, I know he pushed himself hard during the event. Towards the end, I could see he was struggling a bit, but he kept pushing.

I only realised this morning we would be the only married couple that got to be world champions. It is unbelievable, I thought about it and then I quickly tried to forget about it so I could focus on the match. Now, it is such a privilege to be able to achieve something alongside Raneem of that magnitude.

I wanted to thank Haitham Effat, we’ve been working together for 5 years, it was baby steps at times, and it looked like the results were not coming, but we were always in the right direction. Also, my fitness coach, Samir El Degwi, my wife Raneem El Welily, my sister Farah, my parents. Derek Ryan was working with me the whole week and he helped me a lot. A bit thank you to my sponsors CIB and Harrow, my club Gezira Club, DuraClinics, my friend Fabien who came from Dubai, and my dear Walid Yasin, and of course our National Team coach Captain Amir Wagih and at last but not least, the Egyptian Federation and particularly its Vice President who’s been with us all week, Ashraf Kenawy. Of course, thanks to the tournament sponsors, and the Qatari Federation for the amazing tournament they organised and the incredible way they look after us…

“Tarek was on fire from the first point. He was taking it to the front and making me do a lot of work from the first rally."@paulcollsquash was magnanimous in defeat when he spoke to us#squash #PSAWorldChamps pic.twitter.com/DVmUELkBM7 I felt the pain in my leg about 3-1 in the second game. I twisted it and I felt a little pop at the top of my quad so I am hoping it is not too serious. I had no strength in that leg after that and I was constantly off balance and if you are like that against Tarek, who takes the ball in with such skill, it is always going to be an uphill battle, and today I just could not compete with him. I’m very proud of my week, but a bit disappointed by tonight but all credit to Tarek who delivered on the big stage tonight.

I’m very proud of reaching my first world championship final. I’m so grateful from all the support I got from back home, people waking up at early hours in the morning, my whole family has been getting up at 3am and I really appreciate the support that they give me. It means a lot to me, and I want to thank them, it meant a lot to me. 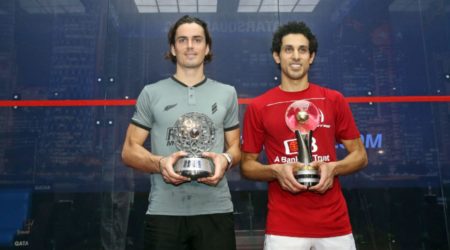