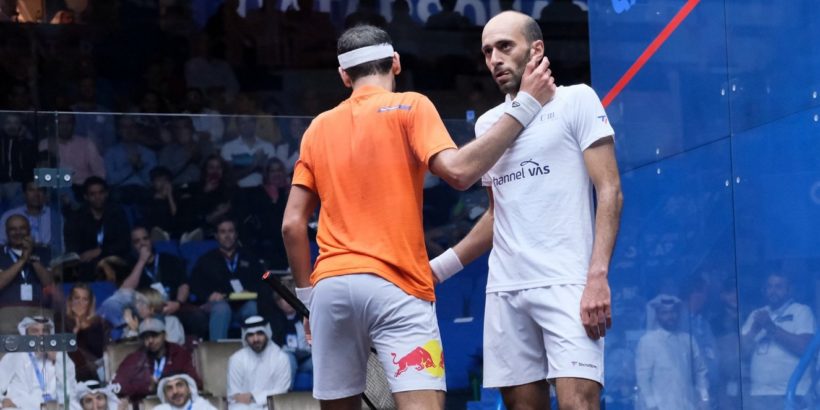 A thought for Basma, the mum…

After the match, an Egyptian came up to me and said with a smile “you were cheering for Marwan weren’t you”. And I replied, “no I was crying for both, because I knew how painful it was for both of them”.
Like Mohamed stated yesterday, “we hate playing against each other, because we both dream of the world title, and one of us is about to crash the other’s dream”…

I’m going to tell you what happened out there tonight. You might think you know f.a. about squash Fram. And you’ll probably be right….

Cut to 2 years ago. When Marwan reached the final of the worlds against his brother in Manchester, Mohamed just passed a terrible time on the tour, and despite having won everything at least twice, he had never won the worlds. And being the younger brother, in Egyptian terms, he considers Mohamed as his dad. And he couldn’t, even if he had wanted it, he just couldn’t break his brother’s heart/dream.

Cut to today. It’s Marwan’s turn to have gone through an horrendous time from the British Open to January. And Mohamed cannot not feel for his little brother that he has got to protect under the Egyptian uses.
Add to that that now, Mohamed has a title on his mantle piece. So today, it was OK for Marwan to walk away with the win, and acceptable for Mohamed to somehow accept it….

End of the psychological mumbo-jumbo, back to stats…

First game, all about Marwan, 14m with Junior at the front, no pressure. High quality squash, but a few nervous errors from Mohamed, 4, only 2 for Marwan, from 3/3 it’s 11/6 for Junior, 6 winners Marwan, 3 Mohamed.

What a finish from @maelshorbagy!! 🙇

World No.10 @maelshorbagy defeated older brother @MoElshorbagy to reach the semi finals of the @PSAWorldChamps 💪

Watch out for when the lights got turned out 👀

Hear what he had to say here! 👇 pic.twitter.com/uDm3DgNecy

Any win against my brother is amazing. He is truly one of the greatest players of our sport, and it was tough. He is so clever, and the most experienced players in the draw.It was tough out there.

At the end it was all mental, and I gave it everything I had. I put my heart into that fifth game and I am just really happy to get that result.What he did in the second and fourth, well, there was nothing I could do. Absolutely nothing. And that’s something I need to learn.

I have played my brother a couple of times already this season, in China and in San Francisco and I was getting close. Today I just made sure I did not make the same mistakes as I did in China and San Francisco. I actually did some, but less, and I am really happy with how I responded in both the third and the fifth games.

I am happy with how I played overall and I am focussed for tomorrow now.Now I’ve got to forget about this match, do my recover, and hopefully, I have two more matches to play