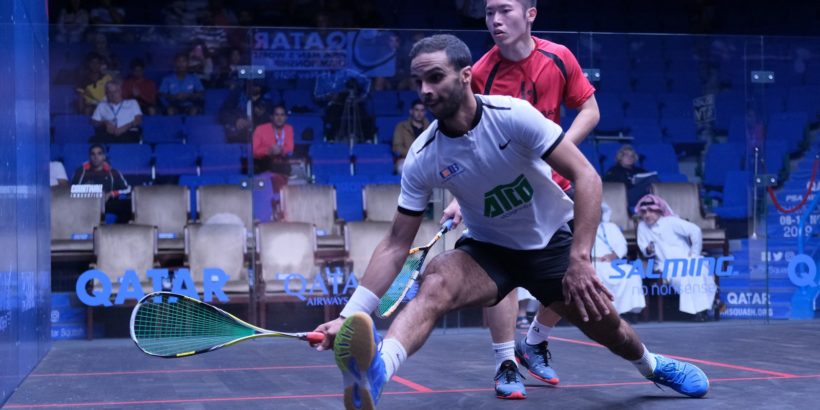 Abou/Leo – A controversial ending to a very good match

What a match that was… Abou has been injured and just didn’t play any tournament until the Egyptian Open last week, where he lost in 5 against English Chris Simpson, lacking both fitness and match fitness – no offence to Chris. Today, he played a superb first game, no errors and controlling the pace/court beautifully 10/4,11/6 in 9m.
Excellent start in the second for the Egyptian, 4/0, but Leo, pretty comfortable on this cold court which suits his game perfectly – lob and drop shot – clawed back to 5/5. Close till the end, 8/9 for Leo, but it’s Abou with some crispy winners at the end, 11/8 in 12m.

The next two see Leo playing his game to perfection, and slowing down the pace beautifully. A pleasure to see that crafty intelligent and fair player at work, taking the third from 6/2, being caught up at 8/9, closing it 11/8 in 14m, then a quick 11/4 in 6m.

"That thing came down with snow on it!" ❄️

Leo Au has produced some wonderful lobs to get back into this match, and the two he played in this rally were some of the best!#squash #PSAWorldChamps pic.twitter.com/L7Z6quiOBc

Will follow two quick strokes – one confirmed by the video ref, that was in our eyes NEVER a stroke, more of a no let – and a second one, very harsh as well in our opinion. For the first time ever, I saw Leo show emotions, truly and utterly distraught, and quite rightly.

“We was robbed” comes to mind….

🗣 "I couldn't be happier, I know we get tough calls, both me and the opponent, it's part of the game."@mabouelghar reacts to his controversial RD2 win over Hong Kong's Leo Au#PSAWorldChamps pic.twitter.com/1Rh4LNKCWD

Mohamed Abou
Leo is such a tough player on this type of court. It suits him really well, it suits his game and he used the lob-drop game after the second and it worked unbelievable well. It put me off guard a little bit, but I’m happy with the way I kept going until the end and things went my way.

I couldn’t be happier, I know we get tough calls, both me and the opponent, it’s part of the game. I’m not really sure about the decision, but I thought I had a good pickup earlier that was called not good, so it is just part of the game.

I had an injury two months ago and I had to stop playing for a month. I’m happy I’m back, my goal is just to enjoy myself, take one match at a time and hope things go well…