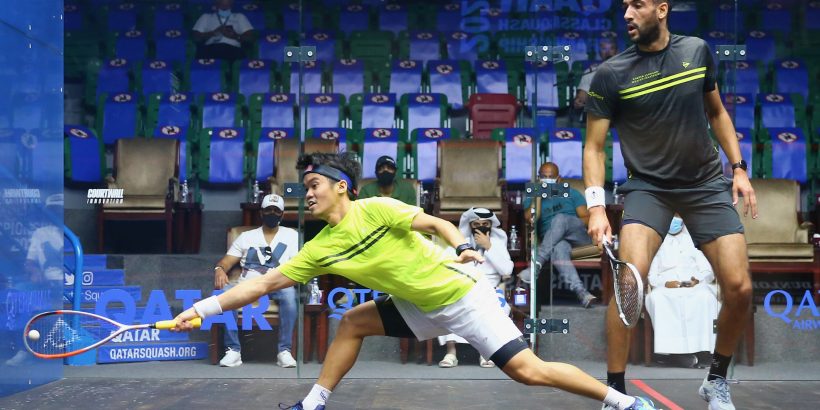 Malaysia’s Eain Yow Ng, World No. 31, secured a berth in the last 16 of the PSA Platinum level Qatar Classic after claiming a straight-games (13-11, 11-7, 11-8) victory against the 24-ranked Englishman Declan James on Tuesday.

The match was the second encounter between the two, and the result and performance was evidently different from the last time, the first round of the 2019 Grasshopper Cup in Zurich, where James took the match 3-2.

“It was a tough match against Dec. He is always consistent, and it is hard to get him out of position. However, I have been training hard, and I really believed in myself. I knew that my squash could be good enough to get me through to the next round and I was playing with confidence,” Yow Ng said after his win. 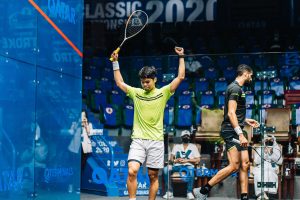 Playing on the Glass Court of the Khalifa Tennis & Squash Complex, James had the early advantage, and he had game balls in the first, but the 22-year-old Malaysian saved both, before taking the opener on his first attempt.

After winning the first on a tie-break, the Malaysian ran out into a lead in the second game. ‘The Dark Knight’ fought back though and was able to level the game midway through. Once again, though, it was Ng that finished the stronger of the two, winning the last three points to take it 11-7.

James held the lead in the third, and for the most part, it looked like he would extend the match into a fourth game. However, a couple of crucial errors gave the Malaysian the advantage, one he kept hold of to seal the victory in straight games.

Yow Ng is set to take on the winner of the second-round match between World No.1 Ali Farag and England’s Richie Fallows for a place in the quarter-finals.