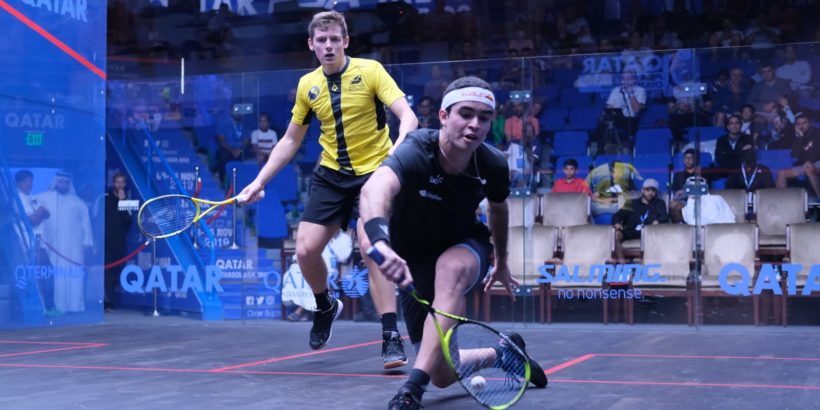 Another strange up and down, in and out match that was! The next two, all about the Mexican, with Greg coughing his lungs out – he has my commiseration as I’m in the same state! 4/0, 11/3 in 6m for Diego and about the same in the next game, 10m for 11/4, Diego looking very good indeed!

The fourth we finally have some nice squash/rallies, both playing excellent fast pace shooting at will kind of squash, 3/3, 5/5, 6/6. At that point, Greg asks for a review and Diego’s shot is called “not good”, as the ball is carried.

“The last match, Gawad carried the ball, and you called it good,” explodes the Mexican! That decision will stay on the mind of the Peruvian for the rest of the game, that he ends up losing 11/9 in 14m.

“You never call a carry” he says to the ref as he exists the court, “and you call it this time, and it’s not a carry!”
Back on court, it’s pretty close between the two warriors, but from 3/3, the Scot will make 6 unforced errors in 7 points, heartbreaking as he is actually the one controlling the rallies, but finding the tin on the last shot!

Peru's @diegoelias96 is into the last 16 of the Men's World Championship after beating @LobSquash, but he admits that the Scot caught him off-guard with the way he started 👇 pic.twitter.com/zAEBO4NBnq

It was a really tough match. Every time we play, we go to five games so I had that in my mind. I started playing better as the match was going but in the first game, it was hard for me I then started to move faster and play better and I am happy I got the win.

After the first game, I felt like I was not in control, and then in the fourth game, I lost a couple of points that I did not play smart on, and he stared playing better and got the game. In the fifth, I knew that I had to win the first few points and because I did, I was able to gain some confidence and it was good at the end.

I will look to recover from this match, and with it being five games it was tough on the body. Tomorrow I will relax a little, make sure to have a good practice session and then get myself ready for my match on Monday.