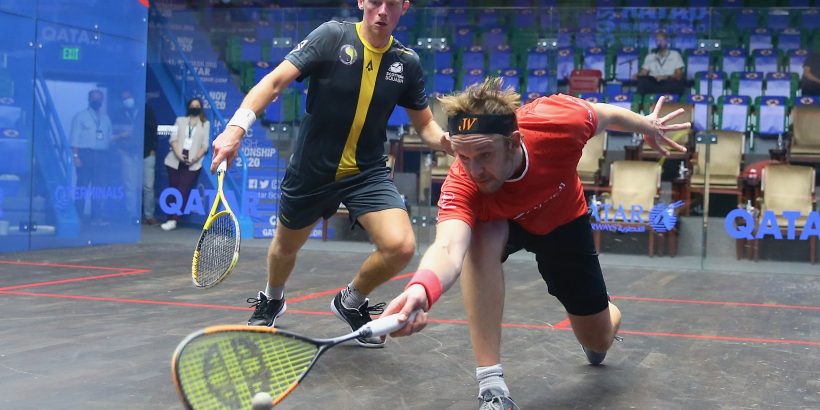 It was England’s former World No.1 James Willstrop who came out tops in the “Battle of the Britons” at the end of the Round 2 encounter on Tuesday.

The World No. 18 Willstrop defeated his Scottish opponent, Greg Lobban, 3-1 (11-7, 13-15, 11-7, 11-7) in the exciting encounter that was just one minute shy of an hour inside the Glass Courts of the Khalifa International Tennis & Squash Complex.

“I think he (Lobban) is known for being physical and strong, but honestly the quality of what he is doing at the minute, especially on the left, it was very hard to get a way in,” Willstrop said after the match.

“I thought the quality was excellent by both of us, and I had to play so well, but I found out today that I couldn’t find the opportunities at all. There were so many rallies down that left side that I couldn’t get a chance because the accuracy on the length was so good. I thought it was a great game and he was unbelievably tough to beat,” he added.

Willstrop, the 2005 champion, who is featuring in the tournament for the 17th time, appeared to take advantage of the seemingly familiar turf as he took the first game within nine minutes.

Lobban, 28, put up a fight in the second, saving two game balls to push the game to the tie-break. Some rapid court coverage from both players ensued with Lobban playing good squash to put Willstrop under pressure and was rewarded with errors from the experienced Englishman to draw level. The third and fourth were, however, a different ball game as the 37-year-old veteran got his mojo back, seeing off the game comfortably in 59 minutes.

“I feel alright and quite fit. We’ve been training all week, and it’s just exciting to be on the court now. It’s a bit of a sad situation right now everywhere, but we’re enormously grateful, and we’re pleased. I’m in a good frame of mind and feeling good,” Willstrop, a quarter-finalist at last year’s PSA Men’s World Championship in Qatar, said.

The Yorkshireman will square up against the winner of Tarek Momen v Youssef Soliman in the next round.