Forty minutes was just all it took World No. 6 Marwan ElShorbagy to dispatch there former World No.1 Gregory Gaultier in straight games (11-7,11-4,11-6) and move into the pre-quarters of the Qatar Classic 2020 on Monday.

There had been eight previous encounters between the pair ahead of the match with the Frenchman leading 6-2. The last time the duo met at the Hong Kong Open three years ago, the victory also went the way of the 27-year-old Egyptian, who is the younger of the ElShorbagy brothers. 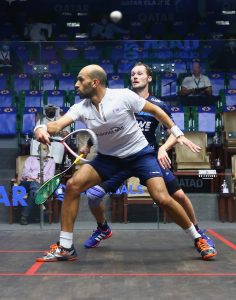 ElShorbagy took control of the first game after some lengthy early rallies, and he quickly established his dominance against the Frenchman, who returned to the Tour in Doha after about a 40-month injury layoff, as he secured an early lead.

The 38-year-old Gaultier had a resurgence early in the second game, winning four of the first five points, but ElShorbagy grabbed the game by the scruff of the neck, winning ten straight points to double his advantage in the match.

The third game was no different from the second as the Egyptian wasted no time in wrapping up proceedings to secure the last-16 ticket where Germany’s Raphael Kandra is waiting in the wings.

“When I saw the draw, I knew that playing him would be really tough. Mentally, it is the toughest first match you can get because of what he has achieved,” ElShorbagy said. “I watched him in 2006 when he played the World Championships, and he is someone who really inspired me. He was my role model; he still is my role model. “I admire what he has done for the game and just seeing the way he moves, the way he plays… For me, he is one of the greatest players of all time! I am delighted to be on the court with him. It is a pleasure for me, and I hope that we see him for many years to come,” he added.