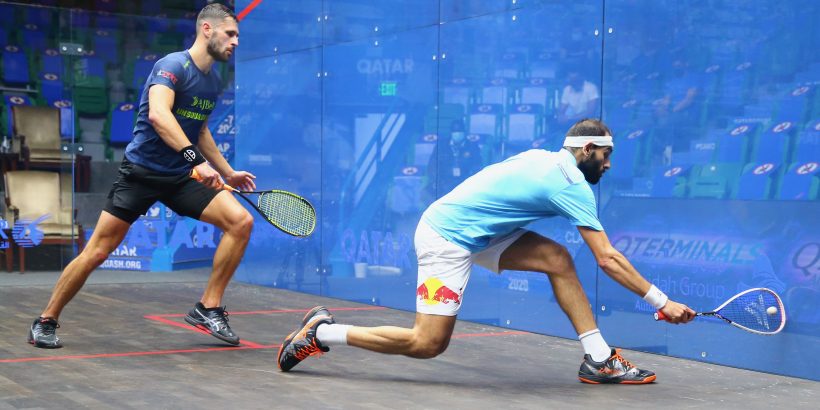 The tournament’s three-time champion and the World No.2 Egypt’s Mohamed ElShorbagy advanced into the third round of the Qatar Classic courtesy of a 3-1 (11-8, 11-6, 9-11, 11-8) defeat of England’s George Parker in 62 minutes on Monday.

Though the result of the last match of the day was in favour of the Egyptian who was until the beginning of this month the World’s topmost-ranked player, it was, however, a hard-fought victory as the 24-year-old Parker made him sweat for the points.

ElShorbagy could have claimed a straight games victory with a lead of 9-7 in the third game, but a series of unforced errors from him ensured the game was extended into the fourth.

However, his experience counted when it mattered most as he came from a 3-6 deficit in the fourth to claim victory on the same courts where he last took the title in 2017.

The 29-year-old Bristol-resident will next face compatriot Youssef Ibrahim on Wednesday for a chance at the quarter-finals.

“It was a very tough first match for me at the tournament, but at the same time, I expected it to be tough. I had a battle with him (Parker) and with myself. It was very hard to come back and play after not playing with anyone for four days. There is no excuse, and I had to fight to win, and luckily I did that again,” ElShorbagy said.

Speaking of his next match about his next match, he said, “I’m very excited to play him. It will be the first time I will be playing someone from his generation. Every generation comes with a new game and style, and they test you differently. It is the new generation that improves the older ones and not the opposite way.”