“I am prepared for another hard match. He [Gregoire Marche] is swift and terrific across the ‘T’. It will be a tough match, and you have to be accurate on this court, or you can get exposed”, Coll said of his upcoming encounter against Marche. 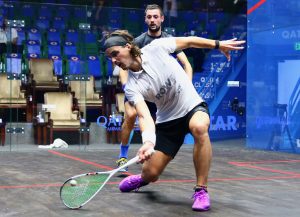 It is the second time in less than two months that the Kiwi will be beating Masotti. He equally accounted for the Frenchman’s first-round exit at the Manchester Open, the first PSA World Tour event held after the tour’s six-month suspension due to the COVID-19 pandemic.

There was some excellent, free-flowing squash in parts across the contest, especially in the first game. Masotti was able to fight his way back into it after being 7-4 down, but he hit three balls into the tin in the latter stages, allowing Coll to take the first.

Coll, a finalist at last year’s PSA Men’s World Championship held at the same venue, established further control in the second game, racing into a 9-2 lead. He closed out the second, before also doing so in the third, as Masotti kept making unforced errors.

“That clash [in Manchester] was both our first matches back after a long break, and I was a bit passive in that match, I wasn’t aggressive enough on the court. That was the main focus for today, to be a bit more positive. I needed to attack the ball a bit more and to be in control,” the 28-year-old Coll, who is the first Kiwi to reach a World final since Ross Norman, said.