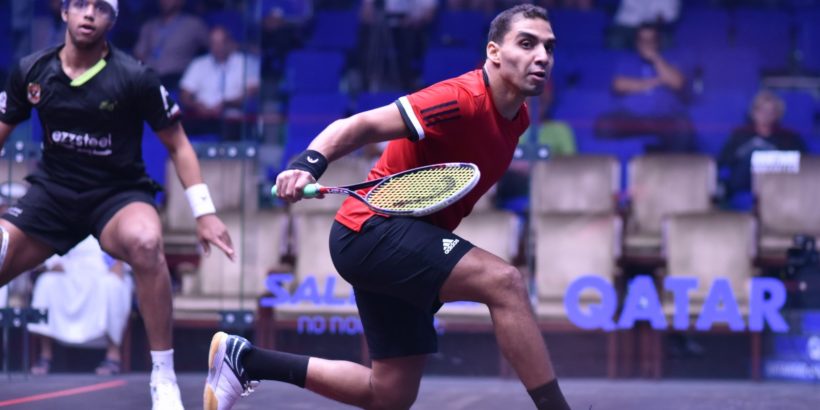 Zahed in form 3/1 against unsettled Mostafa

Some of you might remember that American soap that finished by “are you confused? You will be…” I surely was today…

Today, we had two matches I felt. We had Mostafa, the up and coming young world champ that just beat Diego Elias last week in Cairo, full of confidence, only 18, fighting against experienced Zahed, 27, who just changed coach and now works with Mohamed Ali Anwar Reda, to his benefit.

And then we had the refs against Asal. Yes, Mostafa has developed a reputation for blocking and that led to a chat with Lee Drew in Cairo, to try and explain the way he should move better on court. And today, like the refs did to Fares in Cairo, I feel that they wanted to make a point… Trouble is, for what I could see, the calls against Mostafa were a bit harsh to say the least, and definitely confusing for me, I was struggling to see their line of reasoning. And if they were confusing for me, I guess they were for Mostafa as well…

Back to squash, with a very good first game from Zahed, as cool as a cucumber out there. He has improved his short game, he is still extremely impressive physically, and doesn’t seem to be affected by what’s going on court, just gets on with his business. That’s a huge mental strength I feel…

Hard work being produced on court, and Zahed seems to have a bit of drop in energy/focus in the middle of the second game, at 6/6, making three uncharacteristic errors in four points. Mostafa is happy to take it, playing some exquisite/powerful and accurate squash, 11/6 in 10m.

The third opens with a harsh (in my eyes) no let against Mostafa which unsettled the boy, as it came after a few surprisingly harsh calls (in my eyes again) in the previous two games. Mostafa not in the game, makes a lot of errors and bad choices, Zahed is taking that one quickly, 11/2 in 7m.

The last game, excellent start from Zahed, now fully confident and moving very well, 3/0, but Mostafa is back mentally and fights back, finding some gorgeous shots, 5/5, 6/6. But Zahed is just flying out there now, and his shots are today sharper than his opponent at the business end of the game again, and Mostafa cannot contain the attacks, it’s 11/7 for the Alexandria Sporting Club player….

Mostafa is one of the toughest players, and at 18 years old it’s incredible. I’m sure that every player when they play Mostafa has to give everything and play their best squash from the first point until the last. That’s what I did today, maybe I lost concentration in the second a little bit, but I’m glad that I managed to get it back and win in four today.

After every tournament and after each lost, you learn something new. I have been working on a lot this summer with Mo Reda and with my fitness coach Captain Walid. They are both doing great work with me, I’m really proud of my match today and I’m looking forward to the next one.

It’s an amazing feeling, you’re playing in the last 16 of the World Championship and everyone is giving their best to reach the next rounds. I’m feeling good, I will enjoy my day off tomorrow, and I’m happy to be back after tomorrow.