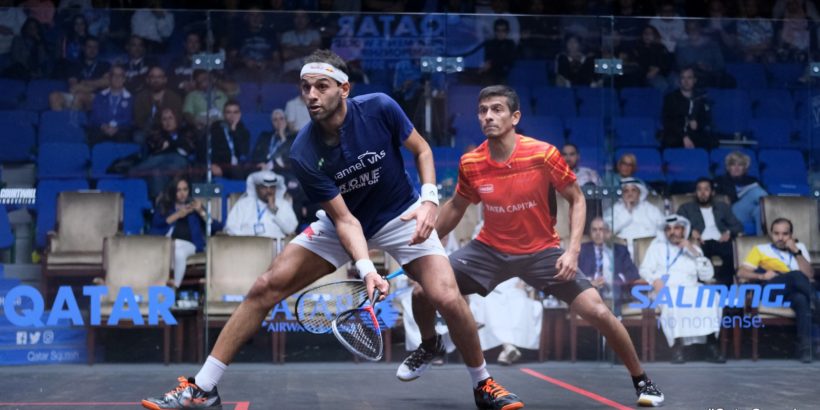 Mohamed gets past Saurav to set up quarter-final against Marwan

Those two are very close friends, and respect each other a lot. And Mohamed is always a bit nervous when he plays against his close friends. How I know? He noticed somebody (Cubs actually) moving at the back of the court, then complained about a baby crying – who had been removed by then. That’s when you know he is worried and not settled.

He was right to be worried. Saurav is a dangerous opponent. He moves very very fast, has exquisite winners, but his strongest point I would say is his counterdrop. That’s where he really hurt Mohamed.

Fast, furious, accurate and sharp. That was their squash tonight. 14m first game, up to 6/6 nothing between them – as Mohamed analysed perfectly in his aftermatch interview – then all about the Egyptian, 11/6.

The second is one minute shorter, 13m, and dominated by Mohamed 5/1, 7/3. At the moment, a good spell from the Indian, 1 point, 2 points… I remember thinking, if Mohamed loses one more point, I’ll hear the famous “Yallah Mohamed” from mum Basma. It didn’t fail. 6/7, and we “hear” the flashing danger light… Zoom, Mohamed back in control, 10/7, 11/8 on a last superb rally..

So entertaining, so much hard work, and they made it look so simple and easy…

Maybe it was a great match, but I didn’t win it…

Could I have done things better? Well, at 6/6 in the first game, I played three shots that clipped the top of the tin. Maybe it was the right shot but at that point in the match, you shouldn’t go for fine lines, it’s such a crucial game, and especially against somebody as good as him to play the important points, he is probably the best in the world at it.

So, yes, you’ve got to be brave and positive, and if the shots had gone in and I had slaughtered the first game and win the match, we wouldn’t have this conversation!

Then in the second, my length dropped off a bit and when you find yourself 1/0 and 5/1 down, on that court, against somebody like him, you are going to get punished, and then it’s a long way up the mountain…

I managed to get my length and composure back in the third, but a bit too late, when you are staring down the barrel.. And at 8/10, he played some superb squash, like I mentioned, that’s what makes him who he is and why he is so good. And if I want to beat him one day, I have to win at least a few of those phases…

World No.2 @MoElshorbagy is into the quarters after beating @SauravGhosal in straight games!

Hear what 'The Beast' had to say about his victory! pic.twitter.com/ubAcvcGcWf

We both go way back and we are great friends. To beat him 3-0 is a huge boost for my confidence because it is never easy to beat him in three.  I think it was 50/50 up to 6/6 in every game, but from that point, I pushed with a hard pace. I feel we both played well, and taking a 3/0 victory gives me a lot of confidence.

Really happy to come back in that third game when I was 10-8 down. That is something I am really proud of.

At that time, you just take it point-by-point. I actually took a lot of risks at that point in the game and I starting going for it. Sometimes it pays off and luckily it did. I was up 6-4 and I should have capitalised, but he just showed the great player he is and the experience he has by coming back into the game and the way he did so was unbelievable.

This is my fourth tournament this season and this will be my third meeting with Marwan. It is normal because we both play in the later stages of the tournament. But it’s the first time we will play in Qatar, in front of such a great crowd.

You may enjoy our matches, but believe me, we hate it, and excitement is not the word I would use when I think about the match. We both want to be world champion, and one of us is about to crush the other one’s dream…

It is a unique situation for our sport, but we both give something different to the sport and I am glad to be a part of it.