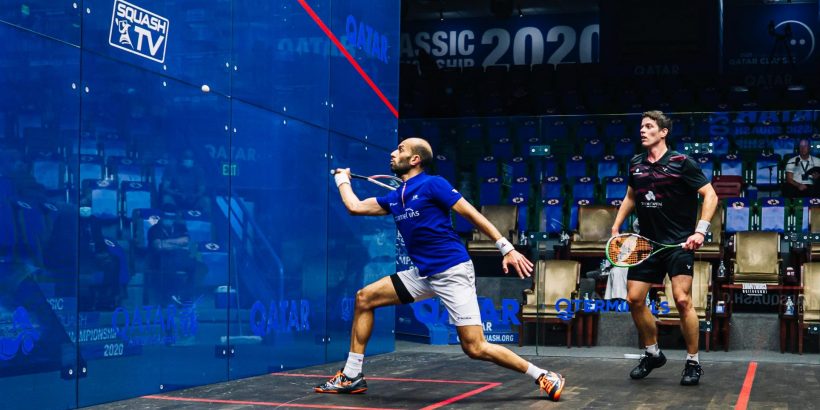 Marwan ElShorbagy ensured that Germany’s Raphael Kandra, the World No. 33, wouldn’t be among the last-eighth players of the Qatar Classic 2020 after posting a straight-games (11-4, 11-5, 11-7) in 34 minutes against the 30-year-old German on Wednesday.

With the victory, the 27-year-old Marwan extended his head-to-head advantage over Kandra to 4-1 with the last match between them, the quarter-finals of the 2019 Oracle Netsuite Open, also ending in straight games in favour of the Egyptian World No.6.

“Before this match, I was aware of our matches before,” said Marwan after the match. “But I also know that I’m a different player compared to what I was six months ago. I was thinking about our match today. I’m really pleased with how I played. I was moving, and my length hitting was on point today, really happy as well to finish in three so I’m fresh for my quarter-final match tomorrow.”

Marwan, the younger of the ElShorbagy brothers, was decisive and accurate with his hitting to take the first game. Kandra developed an adductor injury in the second, and he struggled to make much headway in the remainder of the match as ElShorbagy secured a berth in the quarter-finals of the PSA Platinum event.

“I’ve been playing well so I’m not concerned about the [strict COVID-19] measures. We are very thankful to the organisers that are able to host events – Manchester, CIB in Egypt and the Qatar Squash Federation – all of those events we are very thankful for,” Marwan added.