The 28-year-old Kiwi will next face World No.6 Marwan ElShorbagy in the quarter-finals.

The highly entertaining match, which lasted the whole of 83 minutes (the tournament’s longest so far), was laced with some beautiful rallies and smart positional play inside the Glass Court of the Khalifa International Tennis & Squash Complex.

“He came out very aggressive, and I was a bit passive in my hitting,” said Coll afterwards. “He didn’t miss much the first set, rolled a few. The second and third, I think I made a few mistakes at the start of each, which gave him a lead. In the fourth and fifth I just wanted to cut those out because I was winning the back end of the games and I thought that if I got a lead at the start, then I could hold that through each set.” 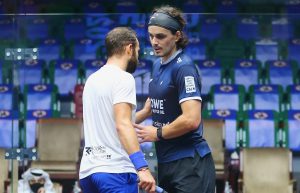 Coll, the finalist at last year’s PSA World Championship, found himself on the back foot in the first game as Marche opened up the lead.

Coll seized the momentum from his 30-year-old opponent by overcoming an 8-4 deficit to take the game 11-9 in 19 minutes.

Marche regained the lead with a high-quality battle between the two players in the third, but fatigue seemed to set in for the Frenchman in the fourth and the decider as he could not withstand the superior play of Coll, who got his mojo back. Coll, the second New Zealander ever to reach a World Championship final, took the last two games in 13 minutes each as he ended the campaign of the Frenchman in Doha.