New Zealand’s World No.5 Paul Coll completely dominated Egypt’s World No.12 Fares Dessouky 3-0 (11-9, 11-0, 11-0) in 37 minutes on Friday to reach the final of the Qatar Classic for the first time in his career, and a second successive major final at the same venue in a year.

The 28-year-old Kiwi, who became the first New Zealander to reach a World final since Ross Norman, at last year’s PSA Men’s World Championship in Doha, showed no sign of fatigue following his two tasking five-game battles in the previous days. He was in a commanding position from the start of the match, and he easily took the first game courtesy of several unforced errors by his 26-year-old opponent.

“I thought I was hitting my targets brilliantly today,” said Coll in his post-match interview. “I really closed the court down. I know how dangerous he is across the ‘T’ line and I think everyone has seen how flat he can put the ball, how quickly he can put shots away and how skillful he is. I just tried to be super accurate today and really get him stuck in the back corners. If you hit your length on this court, then you really get rewarded. I thought I could close the court down and keep him behind me, which I thought I did really well today.” 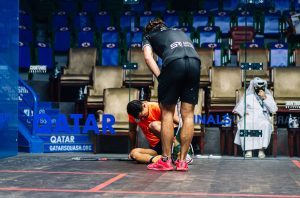 Coll, a semi-finalist at this year’s Manchester Open, had it easier in the second and third games as Dessouky appeared to be somewhere else but the match with his lack of concentration and desire.

Though the Egyptian saw out the match, he was clearly struggling and he offered no resistance as Coll marched into the final on the same court he did 12 months ago.

“I’ve had two great years in Qatar in a row now, so hopefully I can go one further tomorrow, but there’s either the World Champion or the World No.1 up next. I’ve got my work cut out for me, but I felt really good out there today, and really good yesterday, just really looking forward to tomorrow. “I hope Fares isn’t too badly hurt, that’s the third person I’ve seen go down in this tournament. We’ve already had enough time out, so hopefully, he’s not too sore and can be back for the next tournament,” Coll added.