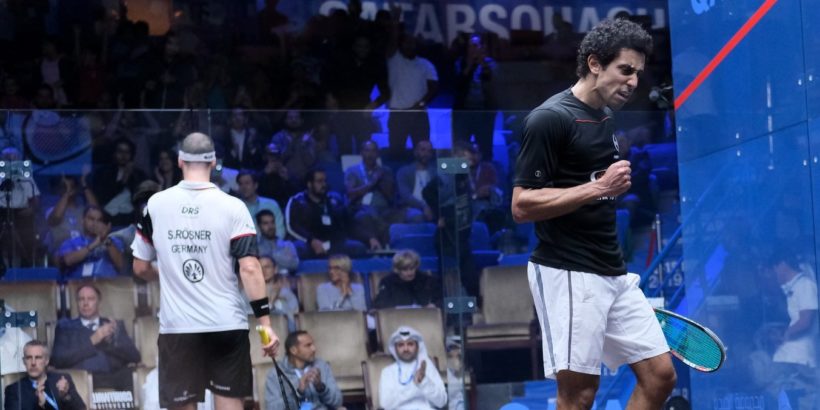 This was the fourth time those two played in 2019. And it was 3/0 to Tarek, with the German taking the two matches they played in 2018, so I guess Tarek could definitely believe in his chances today … But the first game started with a complete domination from Simon, 3/1, 7/2, 8/3. Still, Tarek finally managed to shake his nerves off and although he actually lost the game, the momentum was changed as he clawed back – supported by an “tout à sa cause” crowd, from 6/10 down to only losing 11/9 in 13m.

In the second, Simon managed to stay on top to begin with, 6/3, but couldn’t contain his opponent from that point on. Making three errors in a row from 4/6, he gave confidence back to Tarek, and the Egyptian closed down that crucial one 9/6, 11/7 in 10m.

“I was having troubles reading his game”, confessed Simon. “It was pretty hard to stay with him.”

The movement was the key in my eyes. Tarek made Simon work extraordinary hard, and I feel that was the key. Once the German was a bit slower to get on the ball, Tarek was more and more comfortable, putting more and more pressure.

The crowd was very very happy bless them… Felt like in Cairo really!

Unfortunately went down to a strong T.Momen – had my chances but didn’t use them good enough. Great week tho, very very proud of making it two straight semis at the worlds. Still enjoying squash 🙏

World No.3 @TkMomen is into a second straight @PSAWorldChamps final after defeating @simonroesner in four games!

Hear what 'The Viper' had to say after his win 👇 pic.twitter.com/xthbtdA4AF It feels great. I’ve been through difficult times recently, and I worked so hard, so hard in the off season. To make it here, after the few hiccups, I can’t believe it. . I’ve been pushing myself hard, and I feel that I earned my spot. I’m so looking to push one more time tomorrow.

I’m not going to lie, losing to Joel in Cairo was hard to take. It was not just the loss, I also had a few struggles I wanted to shake off. I’m honestly over the moon to be in this position now. But although I lost that tough first round I knew I had it, I had had some good results in San Francisco, I just had to shake off those few issues.

I’m back for one more match tomorrow.

Simon is such a fierce competitor, and today he gave it absolutely everything. We’ve played a few times this season, and I could tell today he really pushed hard. It was a really good match today. Simon pushed himself really hard and he gave it everything at the beginning. I was really struggling to cope, but at the end of the day, this is the semi finals of the World Championships and nerves have to play a role.

I am just so glad that I managed to pull myself together and keep pushing. There was pivotal moment in the second game when I was 6-3. I had to push really hard because going 2-0 down against Simon… We have had that scenario a few times and I have never won. Going 2-0 down was going to be a real mountain to climb.

I was so glad to come back to win that game, and from then on, I just kept pushing and tried to use my speed advantage a little bit to close out the match. Happily, I managed to win eventually.

I had to adjust a few things, because Simon makes up for the lack of speed with his court coverage. He has a massive reach and he can cut off so many of my shots. I tried to make him work as much as possible without giving him any volleys. It was a tough job for me, because it is always tough to get the ball past someone as tall as Simon.

It is amazing, but I am not done. I have been there already and I know how it feels. The focus is to recover and to prepare myself for a big battle.

It would be a childhood dream to every player to put my name of the trophy, not sure mine. We will have an 18th name tomorrow, I just hope it will be mine. I know that I’ll give everything I have and that hopefully I’ll win…